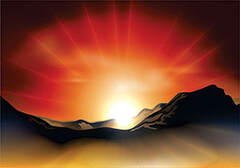 The brilliant light engulfed Saul so suddenly that he gasped and dropped to his knees, shielding his eyes with his arms. His body shook with fear. Then he heard a voice calling out in Hebrew, “Saul! Saul! Why are you persecuting me?”

Upon hearing his name, Saul lowered his arms and forced himself to look at the light, but it was too much for him. So he put his head down and raised his arm to cover his face.

“I am Jesus, whom you are persecuting. It is hard for you to kick against the goads.”

Saul recognized that proverb all too well. An ox-goad was a long pole with sharp barbs of iron at the end. The master would use it to steer the ox, but if the ox was stubborn or dumb, it would inflict pain upon itself by resisting the guiding rod. Saul caught the drift of those words.

“Get up and go into the city. There you will be told what to do.”

Then the light disappeared, and the voice was gone. One of Saul’s companions shouted, “Saul, are you all right?” When he didn’t answer, they ran to him and helped him stand.

“What was that light?” another asked. “What happened?”

Saul was still covering his face. Again they asked, “Saul, are you all right?” Lowering his arm, Saul opened his eyes and said, “The light was so bright. . . . I can’t see anything.”

Saul was surprised that his companions did not hear what the voice said. So he told them what happened. Then he urged them to lead him to Damascus as quickly as they could.

When they arrived in the city, they found lodging but no solution for Saul’s dilemma. For the next three days, Saul ate nothing and drank nothing. As he fasted, Saul prayed.

Meanwhile, a man in Damascus named Ananias, a disciple of the Lord, was also praying.

And as he was praying, he heard the Lord call out to him in a vision, “Ananias!”

“Go to the house of Judas on Straight Street and ask for a man named Saul, from the city of Tarsus. I have heard his prayer and answered his request. He has seen a vision of someone named Ananias coming to his lodging, placing his hands on his eyes, and restoring his sight.”

“Oh, Lord!” exclaimed Ananias. “I have heard many things about this man, and none of them are good. He has inflicted much harm upon your saints in Jerusalem. Even now he has with him letters from the chief priests, granting him authority to arrest all who worship you.”

“Go!” the Lord replied. “For I have chosen this man as my instrument. He will carry my name to the Gentiles, to their kings, and even to the people of Israel. I will show him all that he must suffer for my name’s sake.”

So Ananias obeyed the Lord. He went immediately to the house of Judas and asked to be taken to Saul. “Brother Saul,” he said, “the Lord has sent me to you.”

Placing his hands on Saul’s eyes he said, “Jesus—who appeared to you near Damascus—has sent me so your sight may be restored and you may be filled with the Holy Spirit.”

Immediately, something that looked like scales fell from Saul’s eyes, and he was able to see. After thanking Ananias, he lost no time in acting on his faith: “Permit me to be baptized.”

Then Saul returned to the house of Judas, ate some food, and regained his strength. With the help of Ananias, he spent the next few days reaching out to the disciples in Damascus. On the Sabbath, he went to a synagogue, stood before his Jewish brothers, and announced the last thing anyone expected to hear him to say—that Jesus is the Son of God.

They were speechless. But the jolting news of Saul’s change spread like wildfire.
​
TBC 306
​"Take up the shield of faith, . . . the helmet of salvation, and the sword of the Spirit, which is the word of God."
—Ephesians 6:16-17
The Bible Clicks received the stamp of the Imprimatur in 2010 for Book One (Stories of Faith, Vision, and Courage from the Old Testament)
​and in 2019 for Book Two (Stories of Faith, Hope, and Love from the New Testament).
All contents on this site are copyright protected.
No portion of those books or of this site may be reproduced or copied in any form. Copyright 2010 — 2021 THE BIBLE CLICKS, LLC. All rights reserved.​