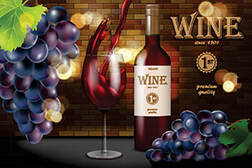 Jesus told Nathaniel that he would see remarkable things, but Nathaniel had no idea it would happen so soon. He and Philip were among those who traveled with Jesus to Galilee, and they were all invited to a wedding in Cana, a town west of the Sea of Galilee. Jesus escorted his family to the wedding, and they sat together during the banquet celebration.

Many people had been invited, and they were all having a wonderful time. A wedding was such a festive occasion that it could last a number of days, perhaps a whole week. The families of the young couple would provide food and wine for all their guests. One highly-respected person might be honored as a special guest, and he would preside over the gathering.

The celebration was far from over, when Jesus’ mother, Mary, noticed that something was wrong. She leaned over to her son and whispered, “Jesus, look! The servants just learned that they are out of wine. Someone needs to help them.”

The hosts of the wedding banquet would be embarrassed to admit they had run out of wine. Mary looked up at Jesus, waiting for him to respond.

“Dear woman,” he said, “why are you telling this to me?” But he knew why. She realized he could do something about it. Jesus looked at her determined expression. How could he make her understand? He leaned over and said softly, “My time has not yet come.”

Mary acted as though she didn’t hear him. She stood up, walked over to the servants, and whispered, “I see that you are out of wine. There’s someone sitting over there who can help you. See that young man? Whatever he tells you to do, do it.” Right away they went to Jesus.

Jesus glanced at the six huge stone jars that were kept for ceremonial washing. Then he said, “Fill those jars with water.”
Immediately, they did as he said. Then they returned.

“Now draw some out,” Jesus said, “and take it to the honored guest.”

The servants looked at each other. They couldn’t serve water to the most honored guest. Everyone would be expecting more wine. One of them glanced at Mary’s face. You could tell what she was thinking: Just do what he says.

They walked toward the jars, worried about what they should do. But when they reached them and peered down, they couldn’t believe their eyes. This isn’t water—this is wine! Quickly they drew some out and took it to the honored guest.

Now the honored guest had no idea that the wine had been drawn from the ceremonial water jars. He took a sip. A surprised look came over his face. The man motioned to the bridegroom. When the groom came, the man whispered, “Everyone brings out their best wine at the beginning and saves the cheaper wines for the last, when no one will notice the difference. But you have saved the best for last. This is excellent wine!”

The servants watched from a distance. They breathed a sigh of relief as a smile came across the groom’s face. The groom had no idea they had been out of wine. In fact, few people knew what had happened.

But as the wedding banquet drew to a close, word began to spread. The story started among the servants. As they worked, they whispered to one another and pointed to “that man named Jesus, the son of Mary. . . .”

“I’m sure it was water in those jars. We were the ones who put it in there. But when we came back, we couldn’t believe it! He turned the water into wine—it was a miracle!”

The servants were not the only ones excited about the miracle. The disciples saw it, too. Jesus had begun to reveal his glory. His disciples knew—this man was sent from God.
​
TBC 193
​"Take up the shield of faith, . . . the helmet of salvation, and the sword of the Spirit, which is the word of God."
—Ephesians 6:16-17
The Bible Clicks received the stamp of the Imprimatur in 2010 for Book One (Stories of Faith, Vision, and Courage from the Old Testament)
​and in 2019 for Book Two (Stories of Faith, Hope, and Love from the New Testament).
All contents on this site are copyright protected.
No portion of those books or of this site may be reproduced or copied in any form. Copyright 2010 — 2021 THE BIBLE CLICKS, LLC. All rights reserved.​