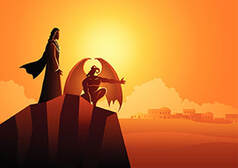 Soon after Jesus was baptized, the Holy Spirit prompted him to go into the desert, where he would face his greatest test yet. The Spirit led him there, knowing full well that he would be tempted by the devil himself.

After his baptism, Jesus was so full of the Spirit that he ate nothing for 40 days. During that whole time he devoted himself to worshiping the Lord.

When he had finished his 40-day fast, Jesus was very hungry. He was weak and he was tired. That’s when the tempter came to him.

“If you are the Son of God,” he said, “command that these stones turn to bread.”

Jesus knew this wasn’t a voice to be obeyed. He recognized it as the voice of the tempter. And he knew there was only one way to overcome it. He answered, “It is written: ‘Man shall not live on bread alone, but on every word that comes from the mouth of God.’ ”

Jesus had quoted Scripture. These were the very words spoken by Moses when the Israelites were in the desert. When they were hungry, God was testing them to see how they would respond and to teach them that what they need most is God.
Jesus did not give in—and neither did the devil. He took Jesus to the holy city, Jerusalem, and set him on the highest part of the temple.

“If you are really the Son of God,” he said, “throw yourself down from here. After all, Scripture also says, ‘He will command his angels concerning you. They will lift you up so that you will not crush your foot.’ ”

Jesus did not argue with him. The Scriptures did say that. But Jesus knew the devil’s purpose. He knew that the devil would do anything and say anything, if he thought it would make Jesus obey him rather than God.

So once again, Jesus relied on the Scriptures to answer him. “It is also written: ‘Do not put the Lord your God to the test.’ ”
Jesus knew he was the Son of God. He did not have to prove it to anyone.

But the devil was persistent. He took Jesus to a very high mountain. In a moment of time, Jesus saw a vision, and all the kingdoms of the world passed before his eyes.

“All this I will give to you,” Satan said to him, “if only you will do one thing—bow down and worship me.”

With no hesitation, Jesus shouted, “Away from me, Satan!” And once again, he drew from the Scriptures: “For it is written, ‘Worship the Lord your God, and serve him only.’ ”

At that moment, Satan left. For Jesus was indeed the Son of God, and Satan had no choice but to obey him.

As soon as the devil left, God’s holy angels appeared. Their very sight brought Jesus joy and encouragement. They provided his needs, giving him something to eat and drink.

Jesus had overcome the evil one. But Satan consoled himself with this thought: I will be back. When he is weak and vulnerable, I will return. . . .
​
TBC 191
​"Take up the shield of faith, . . . the helmet of salvation, and the sword of the Spirit, which is the word of God."
—Ephesians 6:16-17
The Bible Clicks received the stamp of the Imprimatur in 2010 for Book One (Stories of Faith, Vision, and Courage from the Old Testament)
​and in 2019 for Book Two (Stories of Faith, Hope, and Love from the New Testament).
All contents on this site are copyright protected.
No portion of those books or of this site may be reproduced or copied in any form. Copyright 2010 — 2021 THE BIBLE CLICKS, LLC. All rights reserved.​