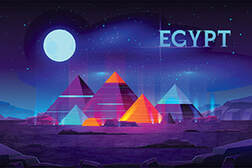 The Magi were not the only ones to have a troubled sleep. When Joseph came home that day, Mary had told him all about the Magi, how they had worshipped Jesus. He stared in dismay as she showed him the gifts they had brought. And that night, Joseph, too, had an unusual dream.

He saw the Lord standing before him, and the Lord said to him, “Get up immediately. Take the child and his mother and escape to Egypt. Stay there until I tell you it is safe to return. Herod is searching for the child to kill him.”

The dream was so startling and so real. Joseph got up while it was still dark. He roused his wife. “Mary, wake up. We have to get ready. We must leave right away. The Lord has warned me in a dream. Herod is searching for Jesus. If he finds him, he will kill him.”

They packed few things. The Magi’s gifts would come in handy. What little money they had would go quickly. Surely the Lord had provided this gold for their journey. They left before sunrise, not knowing that even this was part of God’s plan. The prophet had predicted: “Out of Egypt have I called my son.” It was true in the days of Moses, and now again with the Messiah.

When Herod realized he had not fooled the Magi, he was furious. He shouted to officials, “Send soldiers to Bethlehem immediately! Find every male baby, two years old and under. Search Bethlehem and every village that surrounds it. And when you find them, kill them.”

No one questioned his orders. What else would you expect from a man like Herod? Over the years he had ordered that his own wife and sons be murdered, as well as his mother-in-law, his brother-in-law, and who knows how many others?

Roman soldiers went from house to house, forcing their way in and brutally murdering every male infant and toddler. It seemed that every household was filled with the anguished wailing of mothers and fathers and children.

This tragedy, too, was predicted by the prophets. Jeremiah had written: “A voice is heard in Ramah, weeping and great mourning. Israel’s wife Rachel is weeping for her children; she is refusing to be comforted, because they are no more.” It was as if Rachel, from her grave near Bethlehem, were weeping, first for her descendants’ captivity, now for these massive murders.

Later that year, King Herod died of a horrible disease. But Joseph was in no hurry to return; he still feared for the child’s life. One night, however, the Lord again appeared to him in a dream. “Get up, Joseph,” he said. “Take the child and his mother and go back to the land of Judea. Those who were trying to kill the child have now died.”

Joseph sat up, wide awake. The Lord had spoken to him again. He must tell Mary. Now was the right time. They were to return to Judea. They lost no time in packing their belongings.  When they were finished, they woke up Jesus and got him ready for their journey.

It took many days to travel back to Judea. As they neared their homeland, fear gripped Joseph’s heart. Herod’s son, Archelaus, was reigning as king. The Lord himself had warned Joseph about Archelaus. Joseph had planned to return to Bethlehem, until the Lord spoke to him in yet another dream. So Joseph changed his course. The family headed north toward Nazareth.

Finally, the young couple returned to their hometown, the place where they had both grown up. They had no idea that this, too, was all part of God’s plan, something the prophets had alluded to hundreds of years earlier. The prophet Isaiah had predicted that when the Messiah came, he would be despised. Growing up in that region, Jesus would come to be known as a “Nazarene,” a word that literally means “despised.”

Joseph soon found work as a carpenter. Their family began to grow, and young Jesus proved a great help to both Joseph and Mary.
​
TBC 187
​"Take up the shield of faith, . . . the helmet of salvation, and the sword of the Spirit, which is the word of God."
—Ephesians 6:16-17
The Bible Clicks received the stamp of the Imprimatur in 2010 for Book One (Stories of Faith, Vision, and Courage from the Old Testament)
​and in 2019 for Book Two (Stories of Faith, Hope, and Love from the New Testament).
All contents on this site are copyright protected.
No portion of those books or of this site may be reproduced or copied in any form. Copyright 2010 — 2021 THE BIBLE CLICKS, LLC. All rights reserved.​