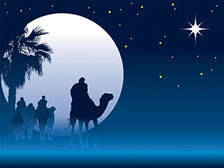 Something strange and wonderful began happening in the heavens the night Jesus was born. Far away, in a distant land east of Palestine, men who studied the stars noticed something bright in the night sky. It looked like a star, but—how did it get there? This could mean only one thing—it was a sign from heaven. Something was about to happen that would forever change the world. For years people had spoken of a coming king, one who would rise out of Judea and rule the whole world. There was only one way to find out. They would travel to Jerusalem.

When the men, who were called “Magi,” arrived in Jerusalem, they quickly made their way to King Herod. “Tell us,” they said, “where is this new ruler, the one who has been born king of the Jews?”

Their question caught Herod off guard. So he sent them away while he consulted his officials, who in turn sent for religious scholars, the chief priests and teachers of the Jewish Law.

“Tell me,” Herod said, “where is the Messiah to be born?”

They looked at one another a moment. On many of their teachings they did not agree. But on this one point, there was no doubt. The Scriptures foretold this very clearly.

One of them said, “The Scriptures say he will be born in Bethlehem in Judea. The prophets recorded: “ ‘But you, Bethlehem, in the land of Judah, are by no means least among the rulers of Judah; for out of you will come a ruler who will be the shepherd of my people Israel.’ ”

Herod then dismissed the teachers, the priests, and the other officials. Being secretive, he sent one of his servants to bring back the Magi.

When the Magi returned, Herod was very interested in all they had to say. He asked them many questions about the star and when they first saw it. Then he told them what the Jewish scholars had said. “So I encourage you,” Herod said, “continue on your journey to Bethlehem. Search for the child until you find him. And as soon as you do, come back and tell me. For I, too, wish to go and worship him.”

After traveling all this way, the Magi were excited about the news given to them by Herod. That star-like object was indeed a sign, just as they had suspected. Surely they would find the young king in Bethlehem.

It almost seemed as though the bright object in the sky were leading them. The closer they got to Bethlehem, the nearer the object seemed. Sometimes they lost sight of it. But as they reached the outskirts of Bethlehem, they shouted for joy. There it was again—almost hovering over that small house in the distance.

When they reached the house, they saw the young child with his mother, Mary. She stared at the men, wondering what brought them to her house. It was obvious from their clothes and their caravan that they were from a distant land. Mary stood in disbelief as the men dropped to their knees and bowed down. They were worshiping her son!

Then they looked up and told Mary of their journey and the star that had led them to her house. They presented the young child with presents fit for a king. One by one they brought out gifts made of gold. Then they gave him some precious incense and myrrh.

That night the Magi were filled with joy as they laid down to rest. But as they drifted off to sleep, they were troubled by their dreams. The Lord spoke to them, warning them: “Do not go back to Herod. He does not desire to worship the child. He wants only to harm him. You must avoid Jerusalem. Go back to your land by another route. Have nothing to do with Herod.”

When they awoke, they were in agreement—they would take another route. They must flee before Herod could find them.
​
TBC 186
​"Take up the shield of faith, . . . the helmet of salvation, and the sword of the Spirit, which is the word of God."
—Ephesians 6:16-17
The Bible Clicks received the stamp of the Imprimatur in 2010 for Book One (Stories of Faith, Vision, and Courage from the Old Testament)
​and in 2019 for Book Two (Stories of Faith, Hope, and Love from the New Testament).
All contents on this site are copyright protected.
No portion of those books or of this site may be reproduced or copied in any form. Copyright 2010 — 2021 THE BIBLE CLICKS, LLC. All rights reserved.​