A Baby Unlike Any Other 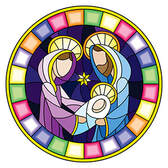 About four weeks after the baby was circumcised, Mary and Joseph left Bethlehem, and they traveled five miles north to Jerusalem. By then Mary would be allowed to enter the temple courtyard. For a woman who had just given birth was considered “unclean.” But 33 days after her baby was circumcised, she could then offer a sacrifice and dedicate him to God.

The Law of God required Mary to offer a year-old lamb as a burnt offering and a dove or a pigeon as a sin offering. But since Mary and Joseph were poor, it was all right to offer just a pair of doves or two young pigeons.

Before the couple arrived, a man named Simeon walked into the temple.  Simeon was known as a righteous man, and he devoted himself to worshiping the Lord. The Holy Spirit would often come upon him. And today, the Holy Spirit had prompted him to enter the temple.

Simeon longed for the day when the Messiah would come to comfort his people. He desired it so much that the Holy Spirit revealed to him when it would happen: “The Messiah will come in your lifetime, Simeon. And you will see him with your own eyes.”

When Mary and Joseph entered the temple, Simeon saw them. Then he saw the baby, and right away he knew, This is the One!
As Simeon approached them, he held out his arms to hold the baby. Mary didn’t know what to think. But a voice within her said, “It’s all right.”

Holding the infant, Simeon praised God: “Sovereign Lord,” he said, “you have kept your promise. Now dismiss your servant in peace. For I have now seen your salvation with my own eyes. This child is a light for revelation to the Gentiles and glory for your people Israel.”

Joseph and Mary stared in amazement as Simeon spoke prophetically about the baby. He blessed them both. Then he turned toward Mary and said, “This child is destined to cause the falling and rising of many in Israel. He will serve as a sign from God, and many will speak against him. Through him, the thoughts of many hearts will be revealed.”

Looking into Mary’s eyes, Simeon added, “And a sword will pierce your own soul, too.”

Mary wondered what he meant by that. But she had little time to ponder. An old woman came up to them. Anna, who was now 84, had made the temple her home, worshiping the Lord day and night. As a young woman, she had been married. But her husband died seven years later. Since then, for more than 50 years, she devoted herself to fasting and praying. And the Lord would often reveal himself to her with prophetic messages.

As soon as she saw the baby, she gave thanks to God. “This is the One!” she cried. “Here is the one who will redeem Jerusalem!”

When Mary and Joseph finished making their sacrifices, they left the temple, wondering what they should do next. Should they return to Nazareth? People would be surprised to see the baby. After all, Joseph had taken Mary into his home only six months ago.

And what about the words of Simeon and Anna? The Lord had special plans for this child. Anna had said he would redeem Jerusalem. . . .

What would the Lord have them to do? Perhaps they should raise the child near Jerusalem, in the birthplace of King David, in Bethlehem. . . .
​
TBC 185
​"Take up the shield of faith, . . . the helmet of salvation, and the sword of the Spirit, which is the word of God."
—Ephesians 6:16-17
The Bible Clicks received the stamp of the Imprimatur in 2010 for Book One (Stories of Faith, Vision, and Courage from the Old Testament)
​and in 2019 for Book Two (Stories of Faith, Hope, and Love from the New Testament).
All contents on this site are copyright protected.
No portion of those books or of this site may be reproduced or copied in any form. Copyright 2010 — 2021 THE BIBLE CLICKS, LLC. All rights reserved.​