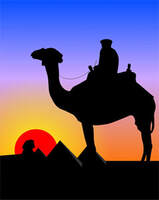 A severe famine had swept over the land, including Canaan, and Israel found himself in a desperate situation. Word spread, however, that Egypt held an abundance of food. When Israel heard that, he sent his sons to Egypt, that is, all except the youngest one. Israel kept Benjamin with him. He held a special place in his heart, for his mother Rachel had died giving birth to him.

Meanwhile, in Egypt, Joseph ruled as its governor. When the sons of Israel arrived to buy grain, they bowed down to him, not recognizing he was their brother. But Joseph recognized them. Pretending not to know them, he harshly asked, “Where do you come from?”

“We came from Canaan to buy food,” they said.

Then all at once, Joseph remembered his dreams. But he continued to act like a stranger. “You are really spies!” he shouted.
“No, my lord,” one of them replied, “we are twelve brothers. The youngest one is with our father; the other is dead.”

Joseph was surprised to hear their response, but he did not show it. He wanted to know more about the other brother. “No,” he insisted, “I believe you are spies. Here is how I will test you: You will not leave here unless one of you goes back to Canaan and returns here with your other brother.” And for three days they were all held in custody.

On the third day Joseph called for them and said, “Since I fear God, here is what you may do: To prove you are honest men, let one of your brothers stay here in prison while the rest of you go back to Canaaan. Then return with your youngest brother.”

Joseph turned away. He had used an interpreter to speak to them, so they didn’t realize he understood what they were saying.

"Surely we are being punished by God because of our brother Joseph,” Reuben said. “Didn’t I tell you not to sin against the boy? But you wouldn’t listen!”

Joseph walked away so no one would see his tears. Then he returned and commanded that Simeon be bound before them. As he walked away, he whispered these orders: “Give them all supplies for their journey. Fill their bags with grain, and put the silver back in their bags.”

The brothers anxiously began their journey home, relieved at the chance to prove themselves. That night, however, when one of them opened his bag, he saw his silver. “Look!” he shouted. “Here is the silver I brought to pay for the grain. How did it get back in my sack?”

When his brothers saw it, they trembled. “What’s going on?” one of them cried out. “What has God done to us?”

As soon as they arrived home, they told their father all that had happened. “The man who is Lord over Egypt accused us of spying and treated us harshly. He kept Simeon in custody. He has told us to return with our youngest brother to prove we are not spies.”

Israel put his head in his hands. As his sons emptied their sacks, each man found his pouch of silver! Now all of them were frightened.

Israel lifted his hands in the air and said, “You have deprived me of my children! Joseph and Simeon are no more, and now you want to take Benjamin. Everything is against me!”

Then Reuben, his oldest son, spoke up. “Let me make the journey with Benjamin. I swear that you can trust me. You may put both of my sons to death if I fail to bring him back to you. I promise, I will bring him back.”

“No!” Israel said. “My son will not go there with you. His brother is dead and he is the only one left of Rachel’s sons. If harm were to come to him on the journey, you would bring my gray head down to the grave in sorrow.”

Israel had spoken. The matter was settled . . . or so he thought.
​
TBC 28
​"Take up the shield of faith, . . . the helmet of salvation, and the sword of the Spirit, which is the word of God."
—Ephesians 6:16-17
The Bible Clicks received the stamp of the Imprimatur in 2010 for Book One (Stories of Faith, Vision, and Courage from the Old Testament)
​and in 2019 for Book Two (Stories of Faith, Hope, and Love from the New Testament).
All contents on this site are copyright protected.
No portion of those books or of this site may be reproduced or copied in any form. Copyright 2010 — 2021 THE BIBLE CLICKS, LLC. All rights reserved.​