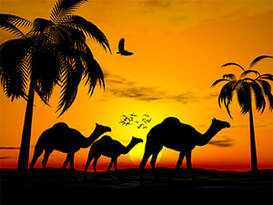 While Israel mourned the death of his young son, Joseph stood on a platform in Egypt, wondering about his fate. He was to be sold as a slave. The only question was, to whom?

An Egyptian named Potiphar finally took Joseph and led him away. He was the captain of Pharaoh’s guard. As far as he was concerned, this was a bargain. The young man was strong and handsome. He had a sharp look in his eye, and something set him apart from the other slaves.

Potiphar’s hunch proved right. Joseph quickly learned the language and customs of Egypt. What’s more, Potiphar found he could trust him. Whatever Joseph did seemed to flourish. For the Lord’s favor rested on him, and God blessed him. Potiphar was so pleased with Joseph that he placed him in charge of his entire household.

It was during this time that Potiphar’s wife first saw Joseph. She smiled and flirted with him, but he walked away. One time she slipped near him whispered, “Come to bed with me.”

Joseph pulled away. “Come,” she urged softly. “No,” he said. “My master has entrusted me with everything he owns. He’s withheld nothing from me—except you, his own wife. How could I do such a wicked thing? I’d be sinning against my master and against God.”

But she refused to give up. Day after day she tried to entice him. One day Joseph walked into the house and no one was home. He felt relieved. Then he heard footsteps approaching. Potiphar’s wife wrapped her arms around him. “We’re alone,” she said. “Come to bed with me!”

Joseph turned to pull away, but she grabbed his cloak in both hands. So he slipped out of his robe and ran out of the house. When she realized her plan had failed, she was furious.

She stared at the robe. I know what I’ll do. . . . Suddenly she screamed. A servant raced in. “That Hebrew tried to force me to go to bed with him! Look—here is his robe!” When Potiphar arrived, she told him her story, and he believed her. Angrily, he threw Joseph in prison.

But the Lord was with Joseph. God gave him favor with the warden, and soon he was put in charge of the prisoners. The warden trusted him completely, for God always gave him success.

While Joseph served as the warden’s assistant, the king’s chief cupbearer and chief baker had offended the king. So he sent them to prison, where they were assigned to Joseph’s ward.

One night, they each had a dream. The dreams bothered them so much that even Joseph noticed something was wrong. “Why are your faces so sad today?” he asked.

“We both had troubling dreams,” one man said, “and we don’t know what they mean.”

Joseph smiled and said, “Don’t interpretations belong to God? Tell me your dreams.”

So the cupbearer began: “I saw a vine with three branches. It budded and blossomed, then its clusters ripened. So I squeezed out the grape juice and put the cup in Pharaoh’s hand.”

“The three branches stand for three days,” Joseph said. “At that time, you will be restored to your position as cupbearer.” The man was relieved. Joseph said, “Now you must do something for me. Remember to mention me to Pharaoh, for I have done nothing to deserve being here.”

When the chief baker saw that Joseph had given a favorable interpretation, he also told his dream. “On my head were three baskets of bread. The top basket held all kinds of baked goods for Pharaoh, but birds were eating from them.”

Joseph looked serious. “The three baskets stand for three days,” he said. “At that time, Pharaoh will call for you. But he will have you hung. And the birds will eat your flesh.” The baker put his head into his hands. He could only hope that Joseph’s predictions were wrong.

Three days later it was Pharaoh’s birthday. He gave a feast for his officials and called both the cupbearer and baker. Then he restored the cupbearer. The baker, however, was hung.

Joseph hoped the cupbearer could get Pharaoh to free him. But the man had forgotten.

TBC 26
​"Take up the shield of faith, . . . the helmet of salvation, and the sword of the Spirit, which is the word of God."
—Ephesians 6:16-17
The Bible Clicks received the stamp of the Imprimatur in 2010 for Book One (Stories of Faith, Vision, and Courage from the Old Testament)
​and in 2019 for Book Two (Stories of Faith, Hope, and Love from the New Testament).
All contents on this site are copyright protected.
No portion of those books or of this site may be reproduced or copied in any form. Copyright 2010 — 2021 THE BIBLE CLICKS, LLC. All rights reserved.​