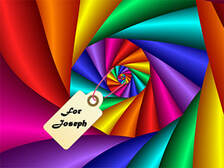 After all he had been through, Jacob should have known better. His mother had favored him, just as Isaac had favored Esau. And what had favoritism brought? Years of painful separation. God had blessed Jacob with a large family and much wealth. But by the time he returned to Canaan, it was too late to share those joys with his mother. So Jacob turned his attention to the family God had given him, but the apple of his eye was his youngest son, Joseph.

Almost 17 years had now passed since Jacob returned. He was no longer the same man. He had even changed his name. He wanted to be called Israel, the name the Lord had given him.

Joseph was a baby when they arrived in Canaan, but now he was a young man, and his father treated him like a prince. Born to Israel in old age, he was the son of Israel’s favorite wife. His brothers knew their father loved Joseph most. They recalled him giving Joseph a beautifully ornamented robe, a sign of his favor, a hint of the birthright. From that day on, they hated him.
​
As for Joseph, he only made matters worse. His father would send him to the fields with his brothers, the sons of Bilhah and Zilpah. As Israel’s youngest children, it was their job to tend the flocks. But when they returned home, Joseph would give his father a bad report about them.

Then there was the day when Joseph told his brothers about a dream he had. “We were binding sheaves of grain,” he said, “and mine stood upright while yours bowed down.”

“What?” they said. “Do you think you will rule over us?” And they hated him even more.

But Joseph didn’t take the hint. He later told them about another dream. “The sun, moon, and eleven stars were bowing down to me,” he said. This time, however, he also told his father about the dream. Israel was angry. “Will your mother, brothers, and I all bow down to you?”

Sometime later, Israel sent Joseph to Shechem to see how his brothers were. But Joseph could not find them. Finally, someone told him they had gone to Dothan to graze the livestock.

As Joseph approached Dothan, one of his brothers saw him in the distance. “Here comes that dreamer,” he said, mockingly. “I suppose his father has sent him here to spy on us.”

“I know how we could stop those reports,” said another brother. “If we did away with him, no one would ever know. Let’s throw him into that cistern and say an animal killed him.”

When Reuben heard this, he said, “Let’s not take his life. Don’t shed any blood. Just throw him into the cistern.” They didn’t know Reuben planned to rescue him and take him home.

When Joseph reached their camp, his brothers pinned him down and stripped off his robe. Then they threw him into the empty cistern. Joseph begged them to let him out, but they ignored him. As they sat down to eat, they saw a distant caravan of Ishmaelites traveling to Egypt.

Reuben was not there at the time. When he later returned, he slipped away to the cistern. Joseph was gone! Reuben tore his clothes in distress. Quickly he ran back to his brothers.

“The boy isn’t there!” he exclaimed.

When they told him what they did, he let out a wail. “Oh no! Where can I turn now?”

But the brothers had already planned their cover up. They picked up the robe they had taken off Joseph. Then they slaughtered a goat and dipped the robe in its blood. When they arrived home, they took the robe to Israel. “We found this. Is it your son’s robe?”

Israel recognized it right away. “It is!” he cried. “Oh, my son!” Their plan had worked. Israel thought an animal had attacked him. He put his head down and wept mournfully. When his sons realized no one could comfort him, they regretted what they had done. But it was too late.
​
TBC 25
​"Take up the shield of faith, . . . the helmet of salvation, and the sword of the Spirit, which is the word of God."
—Ephesians 6:16-17
The Bible Clicks received the stamp of the Imprimatur in 2010 for Book One (Stories of Faith, Vision, and Courage from the Old Testament)
​and in 2019 for Book Two (Stories of Faith, Hope, and Love from the New Testament).
All contents on this site are copyright protected.
No portion of those books or of this site may be reproduced or copied in any form. Copyright 2010 — 2021 THE BIBLE CLICKS, LLC. All rights reserved.​