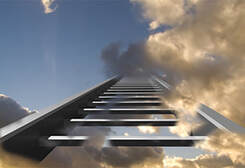 Sorrow turned to rage as an angry young man stormed out of Isaac’s tent. I’ll kill him, Esau thought, after our father dies. . . . His vengeance gave way to angry boasting, and rumors began to spread. When Rebekah heard what he was planning to do, she feared for Jacob’s life.

So she called for Jacob and spoke to him privately. “Esau’s grudge is much worse than I thought. He is consoling himself by planning to kill you once your father dies. You must flee to my brother in Haran. When Esau calms down and his anger subsides, I will send for you.”

“But what about my responsibilities here?” Jacob asked.

“Don’t worry. I will talk to your father so that you may leave with his blessing.”

Then Rebekah went to Isaac. She knew what would persuade him. “Isaac, I’m disgusted with living because of these Hittite women that Esau has married. If Jacob takes a wife like these Hittite women, my life will be worth nothing!” Isaac sighed. They brought grief to him, too.

Her plan worked. Isaac called for Jacob. He entered the tent and knelt at his father’s side.

“My son, I want you to go at once to Paddan Aram, to the house of your mother’s father, Bethuel. Take a wife for yourself from among the daughters of Laban, your mother’s brother.”

Then Isaac reached out and put his hand on Jacob’s head. “May God Almighty bless you and increase your numbers until you become a community of peoples. May he give you and your descendants Abraham’s blessing, to take possession of this land, which God gave to Abraham.”

As he prepared for his journey, Jacob feared for his life. What if Esau sees me leaving and he follows me? He could kill me and no one would know. I must leave quickly.

Jacob covered many miles before his brother learned that he had left. It was the servants who later told Esau that Jacob had left. They said that Isaac had blessed him and sent him to Paddan Aram to take a wife. Not until then did Esau realize how much his Canaanite wives had displeased his father. So my father has blessed him again, has he? That gave Esau an idea.

He traveled to see his uncle, Ishmael, the first son who was born to Abraham. Ishmael had a number of daughters. So Esau arranged to take one of them, Mahalath, as his third wife. He would give special honor to her. Esau was eager to take her to his father and tell him what he had done. And who knows, Esau thought, perhaps I will gain my father’s blessing after all.

But once a blessing was given, it could not be revoked. Jacob would still remain the heir.

As Jacob left Beersheba he set out toward Haran. When the sun began to set, he stopped for the night. Taking one of the stones nearby, he put it under his head as a pillow and lay down.

When he finally fell asleep, Jacob had a dream. He saw a stairway stretching to heaven. The angels of God were ascending and descending on it. At the top of the stairs stood a glorious figure. “I am the Lord,” he said, “the God of your father Abraham and the God of Isaac.

“All peoples on earth will be blessed through you and your offspring. I am with you and will watch over you wherever you go, and I will bring you back to this land. I will not leave you until I have done what I have promised you.”

When Jacob awoke, he thought, Surely the Lord is in this place! Fear gripped his heart. How awesome is this place. This is none other than the house of God and the gate of heaven!
​
The next morning, Jacob took the stone that was under his head and set it up as a small pillar. Then he poured oil on it. That was his way of setting apart that area as a special place. Before then, people called that area Luz. But Jacob renamed it Bethel, meaning “house of God.”

Then he prayed a vow. “O Lord, be with me and watch over me on my journey. Give me food to eat, clothes to wear, and a safe return to my father’s house. If you do this, then you will be my God, and I will give you a tenth of all you give me.” And the Lord heard his prayer.
​
TBC 20
​"Take up the shield of faith, . . . the helmet of salvation, and the sword of the Spirit, which is the word of God."
—Ephesians 6:16-17
The Bible Clicks received the stamp of the Imprimatur in 2010 for Book One (Stories of Faith, Vision, and Courage from the Old Testament)
​and in 2019 for Book Two (Stories of Faith, Hope, and Love from the New Testament).
All contents on this site are copyright protected.
No portion of those books or of this site may be reproduced or copied in any form. Copyright 2010 — 2021 THE BIBLE CLICKS, LLC. All rights reserved.​