Seeds in the Wind, Scattered for a Purpose​ 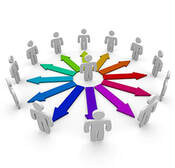 The stoning of Stephen marked a dramatic turning point in the early Church. Believers in Jesus now fled Jerusalem, spreading throughout Judea and Samaria. Those who remained met secretly with the Apostles, and for good reason.

Saul, a Pharisee from the city of Tarsus, was determined to destroy the Church, people of “the Way”—those who believed Jesus was the way to God, the promised Messiah. Going from house to house, he captured men and women who were disciples of Jesus and imprisoned them.

Saul viewed them as heretics, and therefore, worthy of death.

While Saul persecuted believers in Jerusalem, those who fled to Judea and Samaria carried with them the good news of Jesus Christ. Philip, one of the Seven, brought great joy when he proclaimed Christ in a city of Samaria. He performed miraculous signs, healed many paralytics and cripples, and delivered a large number of people from evil spirits.

Now one man in that city had a reputation as a sorcerer. For years Simon had practiced magical arts that gained him a following throughout Samaria. People from all walks of life were captivated by his feats and believed his boasts of divinity, his claims to be “the Great Power.”

But when Simon witnessed the work of Philip, he was astonished. He listened intently to Philip’s teaching about Jesus Christ and the good news of God’s kingdom, and he believed. Along with many other men and women in that city, Simon was baptized. Then he followed Philip wherever he went.

Word soon spread to the believers in Jerusalem that people in Samaria were accepting the word of God. So the apostles sent Peter and John to assist them. Now the Holy Spirit had not yet come upon these new believers, because their baptism was in the name of Jesus only. So Peter and John prayed, laying hands on them, and God imparted the Holy Spirit to each one.

Peter replied sharply, “May your money perish with you! If you think you can buy the gift of God with money, you have no part with us and no share in this ministry.

“Your heart is not right before God. Repent and pray to the Lord. Perhaps God will forgive you for that wicked desire. For I see that you are filled with bitterness and captive to sin.”

Then Simon said, “Please, pray to the Lord on my behalf, that what you have pronounced upon me will not happen.” Simon knew that those words invoking God carried power.

Peter and John continued to testify to the people, proclaiming what they had witnessed and teaching about the kingdom of God. As they made their way back to Jerusalem, they stopped in many Samaritan villages, preaching the gospel, bringing more people to faith in Christ.

By this time, Philip had also returned to Jerusalem—but not for long. An angel of the Lord said to him, “You are to go south on the desert road that leads from Jerusalem to Gaza.” Philip obeyed, not knowing what he would find, but certain it was a divine appointment.

Meanwhile, an official from Ethiopia, in North Africa, had just left Jerusalem. A man of great importance, he was a eunuch serving Ethiopia’s queen mother, entrusted as the steward of her treasury. His purpose for traveling to Jerusalem, however, was a personal one—he had gone there to worship. Now, beginning his long journey homeward, he sat in the chariot, reading the treasured item that resulted from his quest—a scroll with the words of Isaiah the Prophet.

It was then that Philip caught sight of the chariot traveling ahead of him, and as he did, he heard a familiar voice within. “Go to that chariot,” said the Spirit, “and stay near it.”
​
TBC 304
​"Take up the shield of faith, . . . the helmet of salvation, and the sword of the Spirit, which is the word of God."
—Ephesians 6:16-17
The Bible Clicks received the stamp of the Imprimatur in 2010 for Book One (Stories of Faith, Vision, and Courage from the Old Testament)
​and in 2019 for Book Two (Stories of Faith, Hope, and Love from the New Testament).
All contents on this site are copyright protected.
No portion of those books or of this site may be reproduced or copied in any form. Copyright 2010 — 2021 THE BIBLE CLICKS, LLC. All rights reserved.​