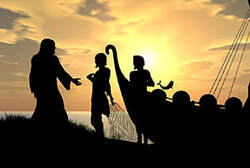 People from all over Palestine flocked to the fishing communities near Capernaum, for they had heard that Jesus was there. Everyone strained to get close enough to see him for themselves—everyone except the fishermen who had just pulled into shore. After fishing all night long, they were exhausted. They just wanted to clean their nets and go home. And that’s exactly what they would have done—if Jesus had not called out to them.

“Simon!” Jesus shouted. “There are so many people here. . . . Would it be all right if I stood in one of those boats?”

Simon looked at his younger brother. I’ll bet Andrew is behind this, he thought. Why must he involve me? Simon sighed. He motioned Jesus to come aboard.

“Could we shove out a bit?” Jesus asked.

Simon told his partners to untie the boat. The boat pulled out, and now everyone could see and hear. So Jesus continued to teach. He spoke for some time, then he dismissed the crowd.

Simon and his brother got ready to pull the boat ashore, but Jesus turned to them and said, “No, wait. Pull out into the deep water. Then you can drop your nets for a catch.”

“Master,” Simon said, “we’ve been up all night and we didn’t catch a single fish.”

Jesus just looked at him, the same way he looked when he asked to use the boat. Simon sighed. What could he say?

“All right,” Simon answered. “If that’s what you want, I’ll do it.” But all the while, he was sure this was a waste of time.

As Simon pulled out farther from shore, he thought to himself, This carpenter’s son may know a great deal about the Scriptures, but he doesn’t know the first thing about fishing. . . .

When they reached a deeper level, Simon and his brother dropped down their nets. Simon wondered how long he should wait before Jesus would be convinced that there were no fish.

Just then he saw the nets pull. They must be snagged, he thought.

When he leaned over the boat, he saw what the problem was—the net was full of fish, so many fish that it pulled tighter and tighter, as if it might break.

Simon cupped his hands and shouted toward shore. When his partners finally looked their way, Simon and Andrew motioned them to come. So their partners, James and John, threw their nets into their boat and made their way toward Simon’s vessel.
As they neared his boat, they saw that his nets were full. They had caught so many fish that they filled both boats. And the weight was so great that both boats began to sink.

All this had happened so quickly. Simon stared in amazement at the massive catch. All night they had fished these very waters and caught nothing. Now, in the daytime, when no one goes fishing, Jesus tells them to drop their nets, and look what has happened! Never had he seen this many fish in one catch.

Simon turned toward Jesus. Then he dropped to his knees.

Jesus stepped toward him and put his hand on his shoulder.

“Don’t be afraid,” Jesus said to him. “From now on, Simon Peter, you will catch people instead of fish.” And from that day on, Jesus and his companions called him Peter.

Peter’s companions weren’t sure what surprised them most—the overwhelming number of fish or Peter’s response. But they felt the same way. This was no ordinary catch of fish. And this was no ordinary man. When they pulled to shore they knew what they must do. They left everything and followed him.
​
TBC 199
​"Take up the shield of faith, . . . the helmet of salvation, and the sword of the Spirit, which is the word of God."
—Ephesians 6:16-17
The Bible Clicks received the stamp of the Imprimatur in 2010 for Book One (Stories of Faith, Vision, and Courage from the Old Testament)
​and in 2019 for Book Two (Stories of Faith, Hope, and Love from the New Testament).
All contents on this site are copyright protected.
No portion of those books or of this site may be reproduced or copied in any form. Copyright 2010 — 2021 THE BIBLE CLICKS, LLC. All rights reserved.​