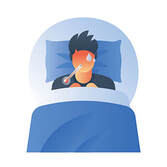 News spread quickly that the rabbi who did miracles was returning to Galilee. Even the Samaritans were talking about him. On his way to Galilee, he spent two days teaching the Samaritans, something no other Jewish rabbi would even think of doing.

The Jews in Galilee were familiar with Jesus since he was a child. To them, he was simply the carpenter’s boy, the son of Joseph. But people were saying he had turned water into wine at a wedding. So they wanted to see for themselves what Jesus could do.

Once more Jesus visited Cana, where he had attended the wedding. A royal official in nearby Capernaum heard he was there, and immediately he set out to find Jesus. He was desperate, for his son lay ill. If Jesus could not help him, the boy would surely die.

As soon as the man found Jesus, he dropped to his knees and pleaded for help.

“Please, come with me,” the man begged. “My son is terribly ill. I’m afraid he will die.”

Jesus knew that many people were now watching him. They were hoping they could see him perform another miracle. But Jesus did not rise to go with the man.

“You people are eager to see miraculous signs and wonders,” Jesus said. “And unless you see such things with your own eyes, you will never believe.”

But all that the man could think about was his son. “Please,” the man urged, “come with me quickly, before my child dies.”
“Go ahead and return to your home,” Jesus said. “Your son will live.”

The man looked at Jesus. Then he realized what he was saying—even without touching him, Jesus would heal his son. So the man took him at his word. He stood to leave, believing that his son would be healed.

The man thanked Jesus and hurried away, for he was eager to return to his son. On his way he saw some people approaching. As they drew nearer, he realized that they were his servants. Quickly he rushed to meet them.

“Master!” they shouted. “Good news! Your son is well! We tried to reach you right away to let you know you need not search for the rabbi.”

“When did my son start getting better?” the man asked.

“The fever broke yesterday,” one of them replied. “I think it was about the seventh hour.”

Right away the father knew—that was the very moment when he was speaking with Jesus. With tears coming down his cheeks, the man raised his hands and praised God.

He told his servants the whole story. “The very moment that the rabbi told me ‘Your son will live’ is the same time when the fever broke. Jesus spoke the word and he was healed.”

When the man entered his home, he hugged his son. Then he told his whole family what had happened, that Jesus had healed their son. Now he and his whole household knew—Jesus was sent from God. And they told everyone they saw.

Meanwhile, Jesus began to travel from synagogue to synagogue throughout Galilee, teaching about God’s kingdom. People from all over Judea, Galilee, and Syria traveled great distances to see him.

Often they brought those who were suffering from diseases that no one could cure—no one except Jesus.  Some came with seizures, some were paralyzed and could not move at all. Some were tortured both physically and mentally because they were demon-possessed. And Jesus healed them.
​
TBC 198
​"Take up the shield of faith, . . . the helmet of salvation, and the sword of the Spirit, which is the word of God."
—Ephesians 6:16-17
The Bible Clicks received the stamp of the Imprimatur in 2010 for Book One (Stories of Faith, Vision, and Courage from the Old Testament)
​and in 2019 for Book Two (Stories of Faith, Hope, and Love from the New Testament).
All contents on this site are copyright protected.
No portion of those books or of this site may be reproduced or copied in any form. Copyright 2010 — 2021 THE BIBLE CLICKS, LLC. All rights reserved.​