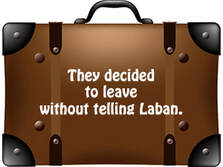 Now that Rachel had given birth to their son, Jacob decided it was time to leave. He met with Laban to tell him about his decision. “I wish to take my wives and my children away from here,” he said, “so I can return to my homeland.”

Laban was afraid of this. “I know the Lord has blessed me because of you,” he said. “Please, I want you to stay. Name your wages, and I will pay them.”

Jacob sighed. Perhaps he should consider Laban’s offer. “All right,” he said. “But don’t pay me anything. Instead, let me remove any speckled or spotted sheep or goats from your flocks. They will serve as my wages.”

Laban agreed. Then he raced out to his fields and removed all the spotted animals before Jacob could take them.

But God blessed Jacob in spite of Laban’s deceitfulness. Jacob took freshly cut branches from poplar, almond, and plane tree. Then he placed them near the watering troughs. The flocks mated there, and when they gave birth, they bore speckled and spotted young.

So Jacob kept those animals for himself. From then on, he took the strongest of all the animals and placed them near the troughs to mate. Those animals continued to bear speckled livestock. Meanwhile, Jacob left the weak animals to mate with Laban’s flock.

Jacob soon grew prosperous, owning large flocks and many servants. When Laban’s sons saw how wealthy he had become, they grew jealous and complained to their father. Jacob noticed Laban’s attitude toward him had changed. And the Lord told Jacob it was time to leave.

So he sent for his wives, Rachel and Leah. As they stood in the fields where no one could hear, Jacob spoke to them: “Your father’s behavior toward me has changed. Each time God blessed my livestock, he changed my wages. It was the Lord who gave me the idea about the branches. He revealed it in a dream. Now he has also revealed that we must leave.”

Rachel and Leah agreed. “Our father has used all the wealth that was paid for us. Surely the wealth God took from our father belongs to us and our children. Do what God has told you.”

They decided to go without telling Laban. As they prepared to leave, Rachel slipped into her father’s home and stole his household idols. No one knew she had done this, not even Jacob.

Jacob and his family traveled ten days before Laban caught up with them. But God had warned him to say nothing good nor bad to his son-in-law. So he simply said, “Why didn’t you let me say goodbye to my family? And why did you steal my household gods?”

Jacob replied, “I was afraid you would take your daughters from me. But as for your household gods, I swear to you, if you find anyone here with them, that person shall not live.”

Laban searched their tents. But Rachel had hidden the little statues in her camel’s saddle bag. Then she sat on it. When her father entered her tent, Rachel pretended she had cramps and could not stand. So Laban could not find them, and Jacob rebuked him for his accusation.

Laban lashed out in anger: “The women are mine, the children are mine, the flocks are mine! Yet what can I do? Since you are leaving, let’s make a covenant, an agreement of peace.”

So they set up a pillar and agreed that neither one would cross that border to harm the other. Both of them pledged their oath before God. Then Jacob offered a sacrifice, and he invited Laban and those with him to join them for a feast.

Early the next morning, Laban kissed his grandchildren and his daughters and blessed them. Then he returned to his home. Jacob thought that his troubles were now behind him. Little did he know that they had only just begun. . . .
​
TBC 23
​"Take up the shield of faith, . . . the helmet of salvation, and the sword of the Spirit, which is the word of God."
—Ephesians 6:16-17
The Bible Clicks received the stamp of the Imprimatur in 2010 for Book One (Stories of Faith, Vision, and Courage from the Old Testament)
​and in 2019 for Book Two (Stories of Faith, Hope, and Love from the New Testament).
All contents on this site are copyright protected.
No portion of those books or of this site may be reproduced or copied in any form. Copyright 2010 — 2021 THE BIBLE CLICKS, LLC. All rights reserved.​