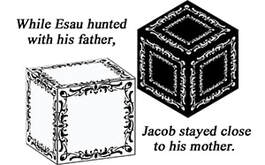 At age 40, Isaac married Rebekah, and both of them looked forward to the day when they would have a child. But as time went on, it became apparent that Rebekah was barren. This troubled her greatly, and now it was Isaac’s turn to comfort her.

“Don’t worry,” he said. “My own mother was said to be barren, and look, here am I!” With a heart full of faith, Isaac prayed, and the Lord granted his request. After 20 years of marriage, Rebekah became pregnant. But the pregnancy was not at all what she had imagined it.

She called out to the Lord and asked, “What is happening to me?”

She could hear his voice as though he were speaking within her: “Do not worry,” the Lord said. “You have two babies inside your womb. I will make each of them into a nation of people. One nation will be stronger than the other, and the older child will serve the younger.”

So at age 60, Isaac became the proud father of twin boys. The first baby to come out of Rebekah’s womb was red and hairy. So his parents named him Esau. When he came out of the womb, his brother was grasping his heel. They named that one Jacob, meaning “heel grabber.”

As the boys grew, it became obvious their personalities and interests were as different as their appearance. Esau was an outdoorsman. At a young age, he became a skillful hunter, like his father. Isaac always had a taste for wild game, so it surprised no one that he favored Esau.

Jacob, on the other hand, was a quiet man who preferred to stay among the tents. While Esau hunted with his father, Jacob watched his mother and enjoyed doing the things she taught him. He was his mother’s son, for Rebekah favored him above Esau.

One day when Jacob was by himself, cooking some stew, his brother Esau came in from the open country. Today he had nothing to show for his labors. Now he was tired and very hungry. The smell of Jacob’s cooking drew him near.

“Let me have some of that red stew! I’m famished!” Jacob knew that was one of his favorite meals. It wasn’t only his red hair that earned him the nick-name “Edom” (red).

Jacob smiled and said, “Just how hungry are you?”

“Very hungry!” he replied. “Now give me some stew.”

“Are you hungry enough to sell me your birthright?”

Esau waved his hand in disgust. “Look, I just told you, I’m starving. So what good is the birthright to me?” To ensure that Esau wouldn’t change his mind later, Jacob said, “Swear to me first.” So Esau promised on oath to give Jacob his birthright.

Jacob now gave him bread and lentil stew. When Esau finished eating and drinking, he got up and left, as if nothing had happened. That was how little he valued his birthright.

The birthright, however, was important in their culture. It signified the privileges and responsibilities given to the firstborn son. When a father was close to death, he would evenly divide all that he owned among his sons. But the firstborn son received a double portion, for he also held twice as much responsibility for their family. He would care for his widowed mother and any unmarried sisters. He would lead the family in decisions and in guiding them spiritually.

Sometimes a father would not give his firstborn the birthright. If his eldest was unworthy of the privileges or unable to handle the responsibilities, he could select another son.

The birthright brought more than wealth. It also brought the father’s spiritual blessing, a prayer to invoke God’s favor upon that son. Sometimes the blessing took the form of a prophetic prediction. Jacob had acquired the birthright, but not the blessing—at least, not yet. . . .
​
TBC 18
​"Take up the shield of faith, . . . the helmet of salvation, and the sword of the Spirit, which is the word of God."
—Ephesians 6:16-17
The Bible Clicks received the stamp of the Imprimatur in 2010 for Book One (Stories of Faith, Vision, and Courage from the Old Testament)
​and in 2019 for Book Two (Stories of Faith, Hope, and Love from the New Testament).
All contents on this site are copyright protected.
No portion of those books or of this site may be reproduced or copied in any form. Copyright 2010 — 2021 THE BIBLE CLICKS, LLC. All rights reserved.​