The Dynamic Power of Prayer​ 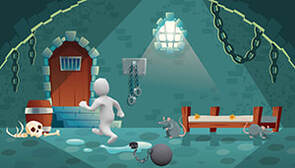 King Herod Agrippa made a bold and treacherous move during Passover, which marked 10 years since the crucifixion of Jesus. The nephew of Herod Antipas (responsible for beheading John the Baptist), Herod Agrippa committed the same atrocity after he began persecuting the church. He arrested key leaders, including the apostle James (brother of John the apostle), and he ordered that James be executed by sword, just as the Baptist was.

When Herod saw that this pleased the Jewish religious leaders, he decided to arrest Peter, too. So Peter was seized and placed in prison, guarded by squads of four soldiers. Once Passover was completed, he would stand trial.

From the moment Peter was arrested, the church began praying in earnest for his release. The night before his trial, they feared this would be his last evening. But Peter slept soundly, chained between two soldiers, while two other soldiers stood guard outside his cell.

In the middle of the night, a light suddenly shone in the cell and an angel appeared, but no one woke up. The angel nudged Peter’s side to jog him awake.

“Quick,” he whispered, “get up!” And as Peter stood, the chains fell from his wrists.

“Put on your clothes and sandals. Then wrap your cloak over you and follow me.”

Peter obeyed, but he was so sleepy that he thought he was having a dream. They passed first one guard, then the other. The soldiers seemed oblivious to what was happening. When they came to the city’s entrance, an iron gate opened for them, and they walked through. Entering the city, they continued for one block. Then the angel disappeared—and Peter was wide awake.

Now I know this wasn’t just a dream, he thought. The Lord did indeed send his angel to rescue me from Herod and from the fate that would have followed.

As he put the pieces together, Peter knew this was the result of people praying for him, and he knew where to find them. So he walked to the home of Mary, the mother of John Mark.

When Peter arrived, many people were inside the house, praying on his behalf. He knocked at the door of the outer entrance. Finally, a servant came, a girl named Rhoda.

“Who is it?” she called warily.

Immediately Rhoda recognized Peter’s voice. She got so excited that she ran back to the group—without opening the door!

When she burst into the room and told them Peter was at the door, they thought she was out of her mind. But she was so persistent that some thought maybe she had seen his angel.

Meanwhile, Peter kept knocking. Now the whole group followed Rhoda to the entrance. When she opened the door, they were astonished and thrilled to see Peter standing before them.

He raised his hand as he entered, motioning them to be quiet. Then he told them what the Lord had done, sending an angel to rescue him. Peter knew he could not stay there much longer. Herod’s soldiers would be searching for him in the morning.
​
“Tell James and the brothers about this,” he said. Then he left for another place.

Peter was referring to James the brother of Jesus, who became a believer after Jesus’s resurrection and was now a leader of the church in Jerusalem. And he was wise to leave quickly.

When morning came, the soldiers were shocked that Peter was gone. Herod demanded to know what happened. Realizing that Peter could not be found, he ordered the soldiers executed.

It was not unusual for soldiers who “lost a prisoner” to pay for it by forfeiting their lives. King Herod would soon realize, however, that he, too, was a man subject to consequences.

TBC 311
​"Take up the shield of faith, . . . the helmet of salvation, and the sword of the Spirit, which is the word of God."
—Ephesians 6:16-17
The Bible Clicks received the stamp of the Imprimatur in 2010 for Book One (Stories of Faith, Vision, and Courage from the Old Testament)
​and in 2019 for Book Two (Stories of Faith, Hope, and Love from the New Testament).
All contents on this site are copyright protected.
No portion of those books or of this site may be reproduced or copied in any form. Copyright 2010 — 2021 THE BIBLE CLICKS, LLC. All rights reserved.​